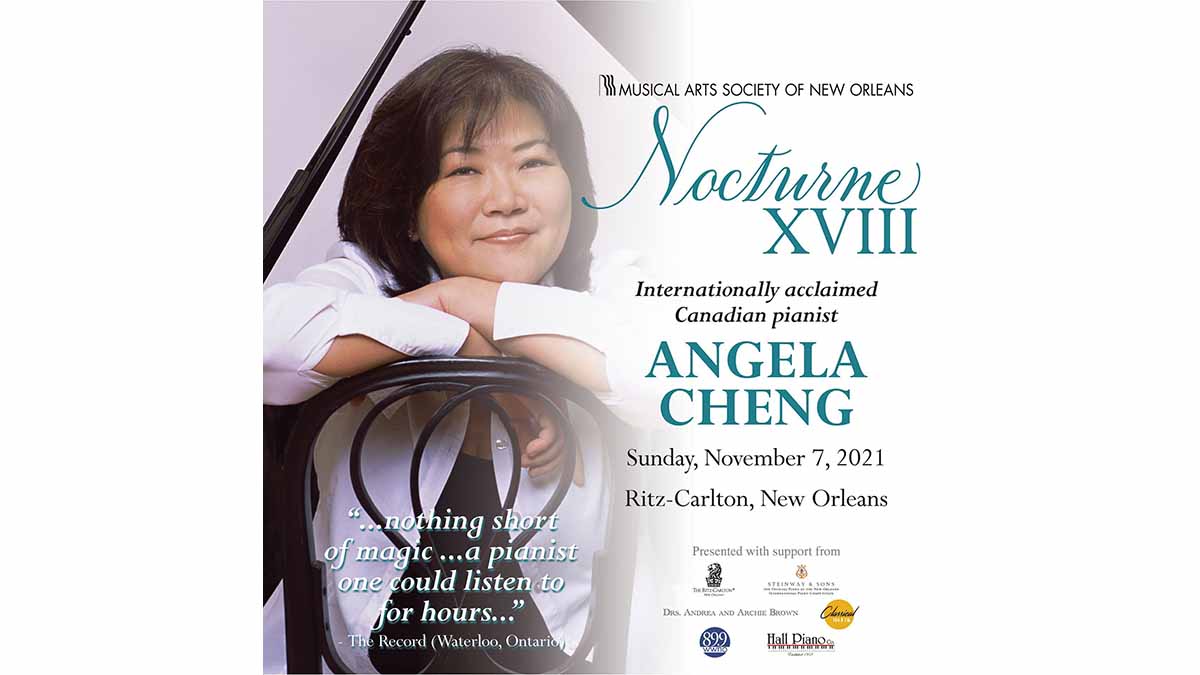 Event tickets are $250 per person or $150 for those 40 years and younger. Tables of ten are available for $2,500. All tickets may be purchased online at www.masno.org. Sponsorship opportunities are also available. Many supporters purchase tickets for area musicians and music students. Such purchases are fully tax deductible. Please contact Cara McCool Woolf at [email protected] or 504.899.4826 for more information about sponsorship.
Purchase Tickets:—>  https://masno.wildapricot.org/event-3796603/Registration
or by calling (504) 899-4826

Schedule of the Evening

Consistently praised for her brilliant technique, tonal beauty, and superb musicianship, Canadian pianist Angela Cheng is one of her country’s national treasures. In addition to regular guest appearances with virtually every orchestra in Canada, she has performed with the symphonies of Alabama, Annapolis, Colorado, Flint, Houston, Indianapolis, Jacksonville, Saint Louis, San Diego, Syracuse, and Utah, as well as the philharmonic orchestras of Buffalo, Louisiana, London, Minas Gerais/Brazil, and Israel.

During the 2019/2020 season, Ms. Cheng will serve as an Artistic Partner of the Edmonton Symphony Orchestra where she will perform three concertos throughout the season: de Falla’s Nights in the Gardens of Spain, Clara Schumann’s concerto in celebration of 200th anniversary of the composer’s birth, and Mozart’s 23rd piano concerto. Other highlights of the season include return engagements with the symphonies of Vancouver and Victoria and Symphony Nova Scotia where she will also perform the Clara Schumann concerto. In the U.S., Ms. Cheng will perform with the symphonies of Richmond and Canton, as well as the IRIS Chamber Orchestra where she will perform the Beethoven triple concerto and the Archduke trio with the Zukerman Trio. In addition to this engagement, her performance schedule also includes extensive touring with Pinchas Zukerman and as a member of the Zukerman Trio, including a European tour in March.

Angela Cheng’s collaborations with Pinchas Zukerman began in 2009, when, at his invitation, she toured both Europe and China as a member of the Zukerman Chamber Players, and as Mr. Zukerman’s collaborative pianist. She joined them again in the spring of 2010 for a U.S. tour, which included concerts at Kennedy Center in Washington, D.C. and the 92nd Street Y in New York. Subsequent seasons have seen multiple tours of Europe and South America, including performances at the Salzburg Festival, the Musikverein in Vienna, the Concertgebouw in Amsterdam, and at the Schleswig-Holstein and Ravinia festivals. With Mr. Zukerman and cellist Amanda Forsyth, as a member of the Zukerman Trio, Ms. Cheng made her debuts at the Verbier, Edinburgh, Miyazaki, St. Petersburg/Stars of the White Nights, and Enescu/Romania Festivals.

Angela Cheng’s debut recording of two Mozart concerti with Mario Bernardi and the CBC Vancouver Orchestra received glowing reviews. Other CDs include Clara Schumann’s Concerto in A Minor with JoAnn Falletta and the Women’s Philharmonic for Koch International; for CBC Records, four Spanish concerti with Hans Graf and the Calgary Philharmonic; both Shostakovich concerti with Mario Bernardi and the CBC Radio Orchestra; and a solo disc of selected works of Clara and Robert Schumann. Most recently, an all-Chopin recital CD was released by Universal Music Canada.

Ms. Cheng was Gold Medalist of the Arthur Rubinstein International Piano Masters Competition, as well as the first Canadian to win the prestigious Montreal International Piano Competition. Other awards include the Canada Council’s coveted Career Development Grant and the Medal of Excellence for outstanding interpretations of Mozart from the Mozarteum in Salzburg.

NOCTURNE is the Annual Gala and Fundraiser of the Musical Arts Society of New Orleans. Held at the Ritz-Carlton in downtown New Orleans, this beautiful event has become one of the most anticipated evenings of the year. The evening includes a champagne reception, salon recital by a world-renowned pianist, and a fabulous dinner. Proceeds from this event help us to continue offering you a wide variety of innovative musical programming during the year.

This event is presented in accordance with Orleans Parish Covid restrictions and guidelines. All guests are expected to adhere accordingly.