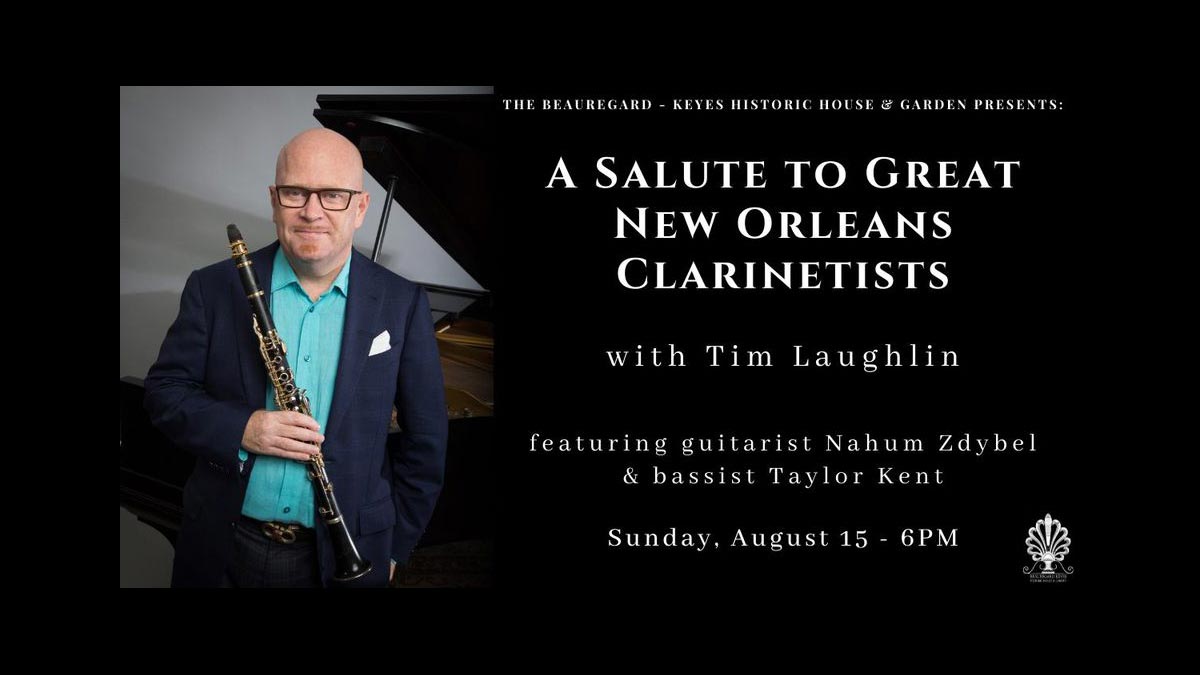 A Salute to Great New Orleans Clarinetists with Tim Laughlin

Join us on Sunday, August 15, for our next concert featuring Clarinetist Tim Laughlin!

After graduating Holy Cross High School, Tim joined the Musicians Union and began working steady at what he likes to call “The Conservatory of Bourbon St.” A few years later, he began an extended stint with The Dukes of Dixieland in the late 80’s and played Carnegie Hall with them in 1992. In 1993, he left and kept his own band together, touring over 20 countries. To this day, Laughlin is one of the most in-demand clarinetists in New Orleans and is a favorite at French Quarter Fest and Jazz Fest.

Tim has played with jazz legends such as Al Hirt, Pete Fountain, and Danny Barker.

Laughlin has a dozen solo recordings. In 2003, “The Isle of Orleans” was an award- winning CD, consisting of all-originals in the New Orleans jazz style and has been featured in TV and movies. In 2016, two of his songs were featured in an Eddie Murphy movie, “Mr. Church.” His latest CD, “New Standards” is another all-originals album, once again bringing New Orleans Jazz to the 21st century.

Recently, Tim received national and international attention as he performed nightly on his balcony on Royal St. for his neighbors, to put music back in a quiet French Quarter during the Covid-19 shutdown. He’s a former board member of French Quarter Festivals, Inc. and is celebrating 40 years as a professional musician.

Joining Tim tonight are Nahum Zdybel and Taylor Kent. Nahum is a talented improvisor and composer based in New Orleans. He leads and tours with his own talented group and is a first- call guitarist on many jobs in New Orleans. Taylor is an established bass player with several bands and performs at times with the LPO.

Doors open at 6pm, with the concert beginning at 6:30pm. Seating is open on a first come, first serve basis in the air conditioned Salle À Manger, or dining room, of the BK House.

This is a Bring Your Own Beverage event! We suggest bringing extra cups and bottle openers with you.